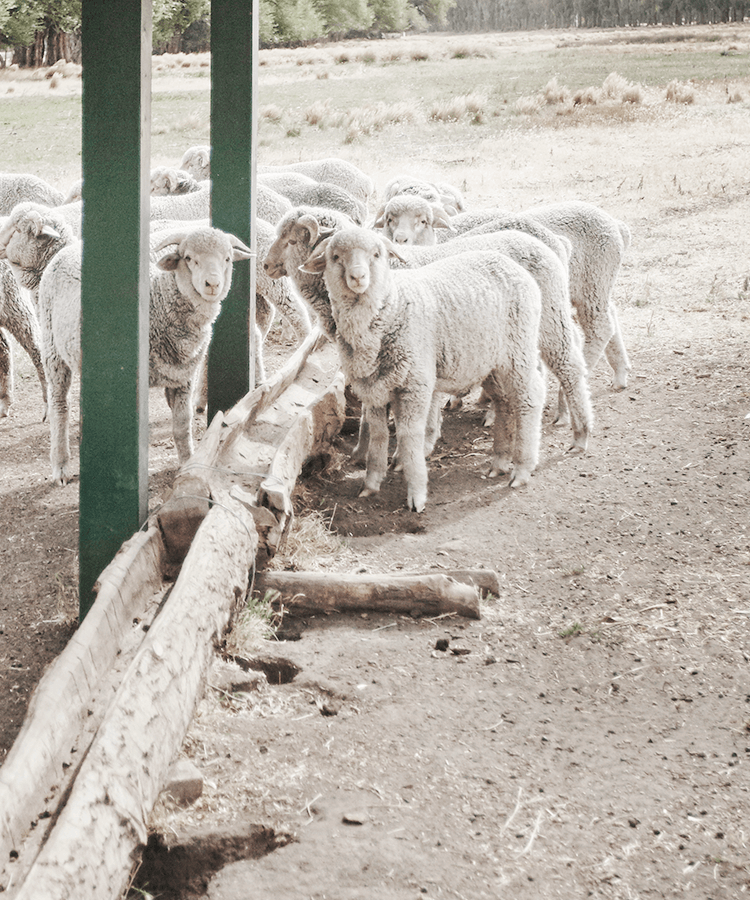 
At DILLING we care about good working conditions for everyone involved in our production – not least the sheep that provide the outstanding merino wool. Therefore, all our merino wool is organic and comes from Patagonia in Argentina.

The picture you see was taken by our CEO, Morten Dilling, when he went to visit the organic farmers. Certifications are great, but it is always nice to see things with your own eyes. If you would like see more from his trip, swing by the blog Travel with Dilling to Patagonia, Argentina.

Animal welfare is what we care about. Below we have gathered answers to the most frequently asked questions regarding the welfare of the sheep.

Habitat and food
In Argentina the distances are huge, and there are vast spaces between the farms. Therefore, the sheep graze on large areas of natural vegetation, and drink water that has been pumped up using wind or solar energy.

Weaning
When the lambs are approximately 100 days old, they are separated from their mothers. At that time they are big enough to take care of themselves and no longer need milk to survive. The weaning is a natural process and in nature, the lamb and the ewe will part when the ewe no longer produces milk. On the farms the lambs will be placed in special paddocks, where they will be fed for the first couple of days in order to avoid causing stress due to the new situation.

Tail docking
In Argentina tail docking is considered a normal procedure. In the rainy season, when the ground is constantly wet, mud and feces will gather as a lump around the tail. When that mass dries, it can stop the blood circulation, which can cause serious infections for the sheep. To avoid that, the tail is cut off when the sheep is very young. This is done with a special tool that reduces the pain, and the wound is closed right away to avoid bleeding.

Mulesing
Wool production has been in the media’s attention several times in connection with mulesing. In short, mulesing is a procedure where a flap of skin around the breech (buttocks) of the sheep is cut off. This procedure is often done without any form of sedation and is therefore very painful for the sheep. Mulesing is most common in Australia and is done to prevent flystrike, which means it is done to prevent the flies from laying their eggs in the fold of the skin at the breech, where maggots can then hatch and cause infections and unpleasantness for the sheep.

This is not an issue in Argentina, where this particular fly does not exist. So mulesing is not used at all there, which we are happy about, because it is not something we would like to support. Castration
On the farms, it is necessary to castrate the rams. There are multiple reasons for that. First of all, it creates order and peace on the farm. The rams are usually more aggressive, and often they fight and jump the fences. So, if you have lots of rams on one farm, they can create chaos.

Secondly, there will be problems if a ram jumps over a fence and into a paddock with ewes. This can result in lambs being born at the wrong times of the year, e.g. when it is cold and dry. At those times of the year it is difficult for the lambs to survive and many may die. To secure animal welfare it is therefore important that the lambs are born in the spring, when the climate is good and the ewes have plenty of food to produce enough milk.

Every pack has around 5% rams and these are separated in special paddocks. This way, it is possible to choose the best males for breeding, in order to end up with the best wool and reduce the risk of health problems.

Castration is performed by putting a rubber band around the testicles to stop the blood flow to the area. The advantage of this method is that the area will quickly become numb and it is therefore considered the least painful method. In addition, you avoid open wounds that can cause infections.

Shearing
In order for us to have gorgeous woollen underwear, the sheep must be sheared. The sheep in Argentina are not completely trimmed. They will keep some of their wool – partly to avoid the trimmer cutting them, but also to make sure that the sheep will not freeze afterwards. The sheep are shorn once a year; if they are not trimmed they will suffer from the weight of their wool and the summer heat.

Slaughtering
When the sheep are around 4-6 years old they start losing their teeth, which in turn adversely affects their health. This is because it is difficult for them to graze and they lose the ability to feed themselves. A natural part of farming in Argentina is the meat production. The farms butcher for their own consumption, but most animals will be sent to professional abattoirs. In both circumstances the focus is on doing everything correctly, so that the animals do not suffer. On the farms, the sheep will be taken away from the others before slaughtering, and killed by knife; in abattoirs the animals are shot.

Our supplier in Argentina keeps the sheep until they are 6 years old, they are then either sent to the slaughterhouse or sold to local farmers with lush grasslands which they can live off for a few more years.

Do you want to know more? Then take a look at our Argentinian supplier Fuhrmann.